Microsoft Office is a pack that consists of a number of programs used for business or office. The first Office was released back in 1990 by Microsoft Corporation. Over the years, several versions and editions of Office were released. They were aimed for different users, each with a specific purpose, and a specific target in the computing environments. The most used version is the one released for Windows and MacOs. On top of that, Microsoft released versions for mobile devices, both for iOS, and Android.You can use it in your studies, your work, and even your home. Microsoft Office has become so used around the globe, to the point where it is impossible for you to go through life, without coming across it, unless you have been living under a rock.It has been integrated in school programs, and is a skill that is required for almost every job these days. The various versions of Microsoft Office are what made him achieve such a huge success. Most notably are the versions we offer on our website, Office 2007, Office 2010, Office 2013, Office 2016, and Office 2019. The most commonly used Office programs are Word, PowerPoint, Outlook, and Excel. Office includes other apps too like OneNote, Publisher, and Access. Microsoft word is a word processing program, that enables users to make and edit text documents, like reports, and letters. As for Microsoft Excel, this program is an electronic spreadsheet, which allows you to store, manage, and arrange data by making fast and detailed spreadsheets. Last but not least, Microsoft PowerPoint helps you create from common slideshows, to professional multimedia presentations.

Being the latest addition to the Office family, Microsoft Office 2019 is considered the most perfected, and polished version of Office to date. The productivity juggernaut is here, and it intends to dominate the productivity scene, providing you with the best experience out there.It equips you with all the tools you need to succeed at school, and at your work. Conserving the familiarity from the 2016 version, Office 2019 also adds new tools that improve on the already established foundation. 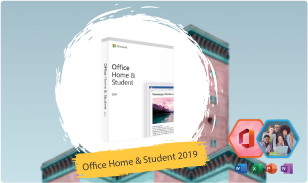 This edition comes with the latest version of the Office programs like Word 2019, PowerPoint 2019, Excel 2019, and OneNote 2019. Overtake your peers at school, and college thanks to Office 2019 Home and Student. 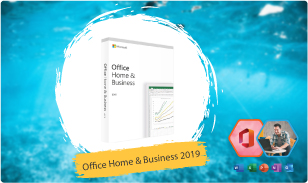 If you work on your own, or intend to run a small business, then this version is meant for you. Thanks to the inclusion of powerful tools like Word, Excel, PowerPoint, and Outlook, you can now build your own empire with this version of Office 2019. 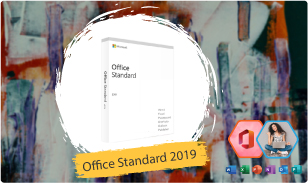 Includes tools like Word, PowerPoint, Publisher, and Excel, the Standard version of Office 2019 is meant to help you achieve your goals as fast, and as easy as possible. 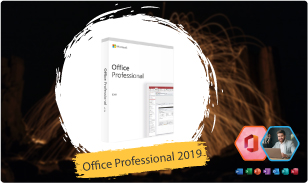 Gain the ability to create documents, financial plans, make presentations and notes, while staying in touch with coworkers through email. With Office 2019 Professional, do all of your tasks with total efficiency. 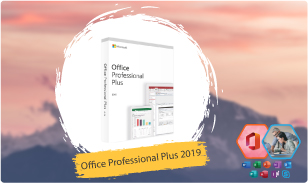 If you strive towards greatness, then this is all you need. Take the professional word by storm thanks to the latest, and most powerful productivity tools to date.

With over 1.2 billion users around the globe, Office became the go-to tool for basic word processing, financial planning, and major companies management.Even before 2016, Office was full of features. However, Microsoft never ceases to impress its users by making new enhancements. Microsoft continues to fine-tune, and refine the Office suite. And with the new 2016 version, they took it even further beyond. Office 2016 focuses on making sharing documents among different devices, easier. Now multiple users can edit the same document simultaneously, in real-time. 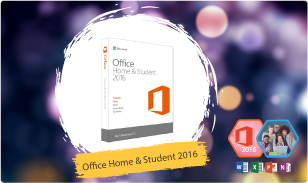 This version brings only the tools you need to succeed in your academic career, like Word, Excel, PowerPoint, and OneNote. 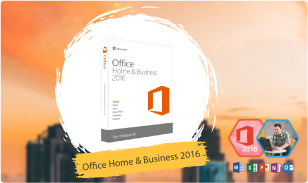 Office 2016 Home & Business This version is intended for use, both at home, and at work. On top of Word, Excel, PowerPoint, and OneNote, this version comes preloaded with Outlook 2016. 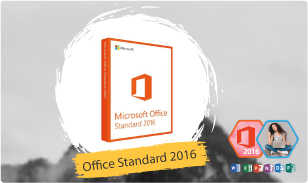 This version grants you access to all of Office’s basic tools like Word, Excel, PowerPoint,Outlook, and Publisher. All of this put in your hand in order to help you increase productivity. 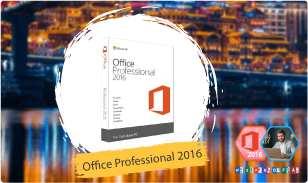 If you want to succeed in your professional career, then this version of Office is the one for you . It brings powerful tools like Word, Excel, PowerPoint, Access, and Outlook, armed with the ability to share your documents and presentations, to other devices, and on the internet. 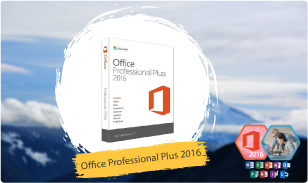 This version of Office 2016 is considered the strongest one in the Office 2016 series, since it comes preloaded with every Office tool and program. Take over the market with Office 2016 Professional Plus as your ally.

Like with the huge success of previous versions of Office, Microsoft did not disappoint with Office 2013. Granted, it may have not brought big changes like Office 2007, and Office 2010, however it brought improvements to the access to Office programs by integrating Office 365. This integration includes OneDrive,Microsoft’s personal cloud storage,and Pitt Email storage space. Whether you’re a student, or an employee, you have total access to Office 365 thanks Microsoft Office 2013. With Microsoft’s main purpose being ease of use and accessibility, Office 2013 has gone through a lot of modifications. You can use Office 2013 with Microsoft’s operating systems like Windows Server 2012, Windows 7, Windows 8.1, and Windows 10. 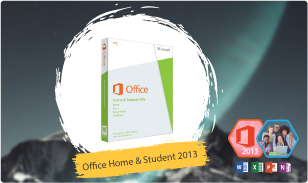 Made with academic and home usage in mind, Office 2013 Home and Students checks all the boxes for the tools that will help you over perform at school and at home. These tools include Microsoft Word, Microsoft Excel, Microsoft PowerPoint, and Microsoft OneNote. 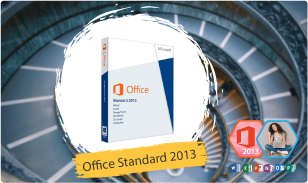 If you want to become more productive and practical, then Office 2013 Standard is the package for you. Thanks to the inclusion of programs like Word, Excel, PowerPoint, and OneNote, see your productivity level go off the roof. 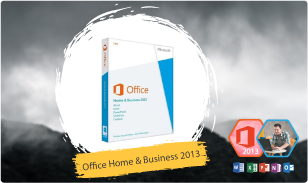 Discover a new way of working, thanks to the new interface that supports tactile interaction from pen or keyboard. Take your productivity to a new level thanks to Office 2013 Home and Business. 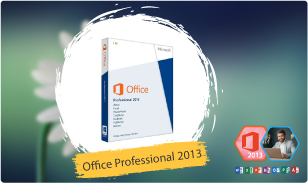 Unlock your true professional potential with the new tools of Office 2013 Professional. Save your documents straight to the cloud with SkyDrive, and access them from anywhere, at any time. 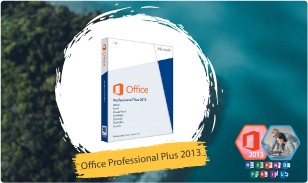 This version of Office 2013 is the most chosen by professionals. In fact it provides everything you need for you to work productively on your business, without the need nor help of a third-party program. 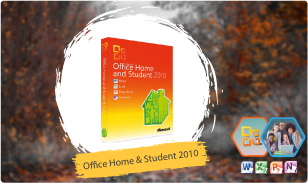 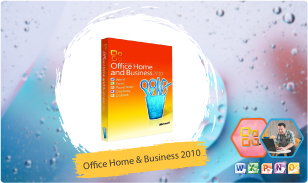 Consisting of Outlook 2010, Word, Excel, PowerPoint, and OneNote, this version of Office 2010 is dedicated for small companies, recurring customers who want to create professional looking documents. 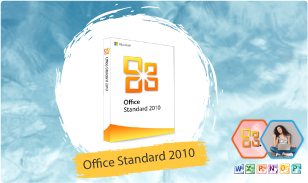 This version of Office brings the essential, and basic components of Office, namely Word, Excel, OneNote, Outlook, PowerPoint, and Publisher. These programs possess the tools you need to increase your productivity. 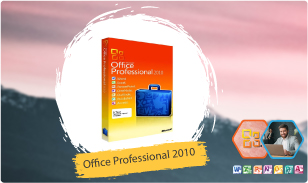 This version comes equipped with professional tools like Word, Excel, PowerPoint, Access, and OneNote, in order to help you achieve your professional potential, whether as an individual, or a business owner. 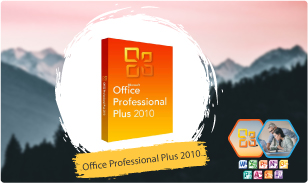 Office 2010 Professional PlusThis is the most powerful and packed version of Office 2010. It has the usual tools you need, like Word, Excel, PowerPoint, Outlook, and OneNote. But also comes with additional programs, such as Access, InfoPath, and Lync.

Released in 2007? Microsoft Office 2007 came and brought several changes with it. These changes touched the whole suite, from Word and Excel, to PowerPoint and Outlook. The most dominant was made to the graphical interface.The Ribbon has replaced the menu, and the toolbars.The new interface came with the ability to distinguish files and commanding functions. It can group relevant commands, and present control sets, which adhere to the current context. Microsoft Office 2007, was released for computers that use Windows operating systems. Even after so many new releases, a lot of people still prefer Office 2007, because it does what it’s supposed to do, and it does it quite well. 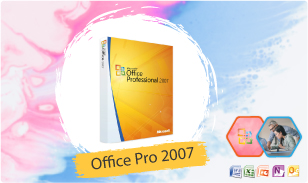 Targeted at business users, this more business oriented version of Office 2007 focuses on the development, and access of databases. If you’re running a business and want to increase your productivity, then Office 2007 Professional is the suite for you. 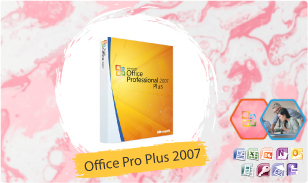 Power hungry users demand a powerful suite, this is why Microsoft released Office 2007 Professional Plus. It is the best program to guarantee the desired results.

Find out what other customers say about us
Karim Abd Allah 02/21/2020, 15:45
Very rapid customer support that was able to respond quickly to our request: we were unable to install the purchased software. Customer service was able to do it remotely.
KNOW MORE
THE COMPANY
ADDED VALUE
MORE SERVICES
MY ACCOUNT
ANY QUESTIONS LEFT?

(Monday to Friday : 9am-4am)
FOLLOW US ON
SHOP SAFELY

CUSTOMER EXPERIENCE
Karim Abd Allah 02/21/2020, 15:45
Very rapid customer support that was able to respond quickly to our request: we were unable to install the purchased software. Customer service was able to do it remotely.
© 2004-2021 Elektronik Billiger UG. All copyright reserved©. All costs are in UAE Dirham and except VAT, Real time-DELIVERY free and no management costs, except as otherwise specified. Adjustments and failures are held. Images could be for reference purposes use. Just as long as stocks last. Area of shipment: United arab emirates .